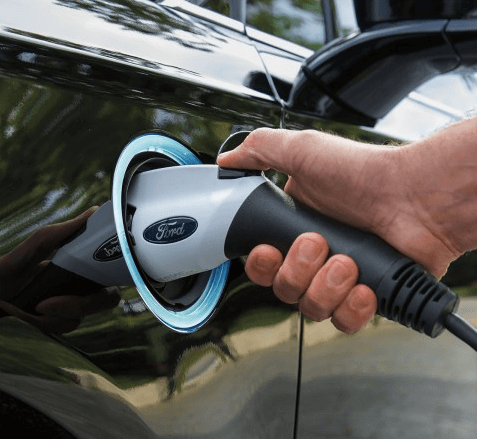 The Mondeo Energi, to be launched in early 2018, will be the first plug-in hybrid to be manufactured by the Changan Ford JV. As reported, it will feature an electric drive range of up to 50 kilometers. Ford also confirmed plans to bring an all-new fully electric small SUV to China within five years. The SUV will be engineered to deliver an estimated range of more than 450 kilometers and will be sold in North America and Europe, as well as China.

China is the world’s largest new energy vehicle market, thanks to strong government support and growing customer acceptance. According to the Society of Automotive Engineers of China, by 2025, new energy vehicles are expected to account for over 15% of total passenger vehicle sales in China.

“The time is right for Ford to expand our EV lineup and investments in China,” says Mark Fields, Ford president and CEO, who will further detail Ford’s electrification strategy at a special event in Shanghai on April 8. “We are prioritizing our electrification efforts in China to reflect its importance as a global electrified vehicle market.”

To address the diverse needs of consumers in China, including the growing demand for EVs, Ford will offer a comprehensive range of electrified solutions by 2025 – hybrids, plug-in hybrids and fully battery-powered EVs. By then, 70% of all Ford nameplates will have electrified powertrain options, including the full range of nameplates produced by Changan Ford.

In addition, by 2020, Ford will start manufacturing electrified powertrains in China. It also plans to expand its new energy vehicle engineering capabilities at its Nanjing Research and Engineering Centre.

Globally, the company is investing $4.5 billion to electrify its most-popular, highest-volume vehicles for customers, offering more capability, productivity and performance, with better fuel economy. In January, Ford confirmed seven of the 13 new global EVs it will launch in the next five years, including the all-new fully electric small SUV that will be sold in China, and a hybrid autonomous vehicle designed for commercial operations in mobility services, starting in North America.

Ford adds that its C-MAX Energi plug-in hybrid is already on the road in China as a fleet vehicle.

“Ford is committed to developing smarter, greener mobility solutions for the future, and our team in China will be at the forefront of this innovation,” says Trevor Worthington, vice president of product development for Ford Asia Pacific.