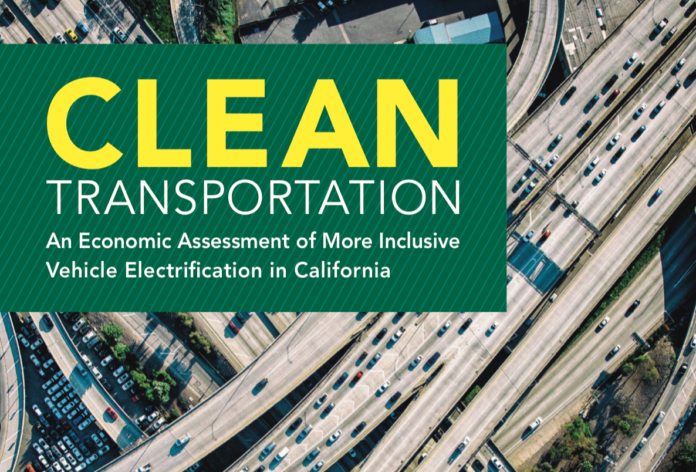 According to a new report, the electrification of light-duty vehicles in California could be a catalyst for economic growth over the next 10 years.

The report, Clean Transportation: An Economic Assessment of More Inclusive Vehicle Electrification in California, was prepared by Berkeley Economic Advising and Research and assesses the economic implications of the projected increase in electric vehicle (EV) use with a long-term economic forecasting model – focusing on the policy milestone years of 2030 and 2050.

Even under a relatively conservative baseline scenario that assumes no improvement in EV costs in the coming 10 years, EV adoption could result in significant economic benefits by stimulating the overall economy, reducing harmful pollution and improving public health outcomes. Other scenarios that consider anticipated drops in price and increase in innovation show even greater gains.

“This data shows that an increase in electric vehicles could pay dividends to Californians across the board – increasing real income and gross state product by billions of dollars by 2030,” says F. Noel Perry, founder of think tank Next 10, which commissioned the report. “Transitioning to electric vehicles is not just an investment in mitigating climate risk. It’s an investment in the economy.”

Successfully hitting California’s 2030 GHG reduction goals with the scale of increased EV adoption modeled in this study would create more than 390,000 new jobs under a conservative scenario – and more than half a million new jobs in the scenarios that account for steeper declining costs and increasing model choices.

The report notes that the manufacturing of fuel-efficient vehicles is already associated with 14,776 jobs in California, and more indirect employment could be generated through increased demand for charging infrastructure and utility load. The projected job growth and economic benefits noted in the study come from avoided fuel costs alone.

Across all of the scenarios modeled in the study, disadvantaged communities saw the greatest relative benefits – with higher proportional job growth and larger per-capita economic gains compared to the rest of the state’s population. But when adoption is concentrated in lower-income communities, the gains are even larger, and higher-income groups experience the same benefits across scenarios.

“It shouldn’t be surprising that populations most impacted by pollution are also lower-income,” notes Perry. “EV adoption in these communities can help improve health, reduce costs and create real economic benefits. Regardless of whether or not you own an EV, you stand to benefit from more clean vehicles on the road.”

Next 10 is an independent, nonpartisan organization that educates, engages and empowers Californians to improve the state’s future. With a focus on the intersection of the economy, the environment and quality of life, Next 10 employs research from leading experts on complex state issues and creates a portfolio of nonpartisan educational materials to foster a deeper understanding of the critical issues affecting California.