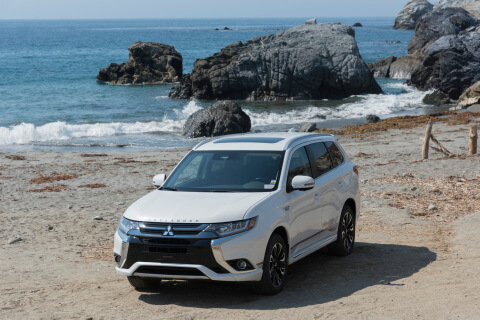 Mitsubishi has announced that the plug-in hybrid electric version of its Outlander crossover vehicle – which is the best-selling PHEV in Europe – is making its U.S. debut in December.

Dealerships will be offering the Outlander PHEV at a starting MSRP of $34,595. The crossover features a 2.0-liter gas engine and two high-performance electric motors, along with Mitsubishi’s Super All-Wheel Control (S-AWC) system. It also features DC fast-charging capability.

“The Outlander PHEV is an all-new driving experience that is unmatched in the market; until now, this type of vehicle has been exclusive to the premium segment,” says Don Swearingen, executive vice president and chief operating offer of Mitsubishi Motors North America. “Offering EV technology in a very capable crossover will satisfy a consumer need that’s been missing in the marketplace.”

The Outlander PHEV’s two full-time, high-output electric motors are separately mounted at the front and rear axles to supply torque on demand. The front electric motor is positioned transaxle-style on the left side of the gas engine and has an output of 60 kW. The system features a front-mounted generator that converts mechanical power to electricity and continuously charges the drive battery, while a power drive unit helps to convert the electric power and send it to the front motor. Regenerative braking is also used to generate electricity for the system. The rear 60 kW motor and electric motor control unit are mounted beneath the rear cargo area subfloor.

The battery that supplies the electricity for the motors is a high-capacity, 12 kWh lithium-ion battery pack developed specifically for the PHEV system. The battery pack consists of 80 cells configured in a series, with a total voltage measuring 300 V. The battery is located in a dust-proof and waterproof encasement positioned beneath the passenger compartment subfloor and between the front and rear axles.

Owners can charge the Outlander PHEV via three different methods. The battery can be charged with a standard 120 V power outlet at home with the supplied charging cable (full charge in less than eight hours), or with a public or residential 240 V charging station (full charge in less than four hours). The Outlander PHEV also comes standard with DC fast charging capability, which can charge the vehicle up to 80 percent capacity in as little as 25 minutes.