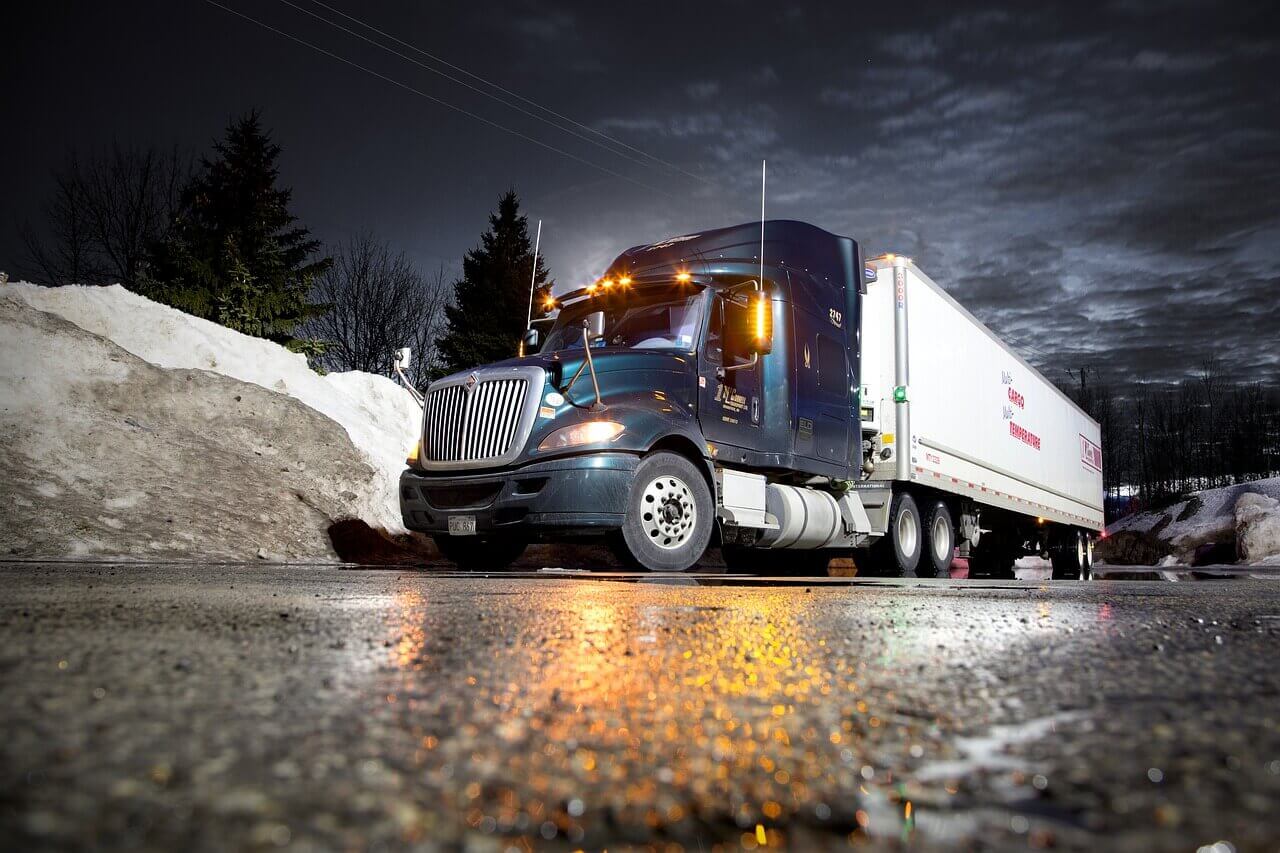 Heavy-duty trucks, such as the 18-wheelers that transport many of the world’s goods from farm or factory to market, are virtually all powered by diesel engines. They account for a significant portion of worldwide greenhouse-gas emissions, but little has been done so far to curb their climate-change-inducing exhaust.

Now, researchers at MIT have devised a new way of powering these trucks that could drastically curb pollution, increase efficiency and reduce or even eliminate their net greenhouse-gas emissions.

The concept involves using a plug-in hybrid engine system, in which the truck would be primarily powered by batteries, but with a spark ignition engine (instead of a diesel engine). That engine, which would allow the trucks to conveniently travel the same distances as today’s conventional diesel trucks, would be a flex-fuel model that could run on pure gasoline, pure alcohol or blends of these fuels.

While the ultimate goal would be to power trucks entirely with batteries, the researchers say, this flex-fuel hybrid option could provide a way for such trucks to gain early entry into the marketplace by overcoming concerns about limited range, cost or the need for excessive battery weight to achieve longer range.

“We’ve been working for a number of years on ways to make engines for cars and trucks cleaner and more efficient, and we’ve been particularly interested in what you can do with spark ignition [as opposed to the compresson ignition used in diesels], because it’s intrinsically much cleaner,” Cohn says. Compared to a diesel engine vehicle, a gasoline-powered vehicle produces only a tenth as much nitrogen oxide (NOx) pollution, a major component of air pollution.

In addition, by using a flex-fuel configuration that allows it to run on gasoline, ethanol, methanol or blends of these, such engines have the potential to emit far less greenhouse-gas than pure gasoline engines do, and the incremental cost for the fuel flexibility is very small, Cohn and Bromberg say. If run on pure methanol or ethanol derived from renewable sources such as agricultural waste or municipal trash, the net greenhouse-gas emissions could even be zero.

“It’s a way of making use of a low-greenhouse-gas fuel” when it’s available, “but always having the option of running it with gasoline” to ensure maximum flexibility, Cohn says.

While Tesla Motors has announced it will be producing an all-electric heavy-duty truck, Cohn says, “we think that’s going to be very challenging, because of the cost and weight of the batteries” needed to provide sufficient range. To meet the expected driving range of conventional diesel trucks, Cohn and Bromberg estimate, would require somewhere between 10 and 15 tons of batteries. “That’s a significant fraction of the payload” such a truck could otherwise carry, Cohn says.

To get around that, “we think that the way to enable the use of electricity in these vehicles is with a plug-in hybrid,” he says. The engine they propose for such a hybrid is a version of one the two researchers have been working on for years, developing a highly efficient, flexible-fuel gasoline engine that would weigh far less, be more fuel-efficient and produce a tenth as much air pollution as the best of today’s diesel-powered vehicles.

Cohn and Bromberg did a detailed analysis of both the engineering and the economics of what would be needed to develop such an engine to meet the needs of existing truck operators. In order to match the efficiency of diesels, a mix of alcohol with the gasoline, or even pure alcohol, can be used, and this can be processed using renewable energy sources, they found. Detailed computer modeling of a whole range of desired engine characteristics, combined with screening of the results using an artificial intelligence system, yielded clear indications of the most promising pathways and showed that such substitutions are indeed practically and financially feasible.

In both the present diesel and the proposed flex-fuel vehicles, the emissions are measured at the tailpipe, after a variety of emissions-control systems have done their work in both cases, so the comparison is a realistic measure of real-world emissions. The combination of a hybrid drive and flex-fuel engine is “a way to enable the introduction of electric drive into the heavy truck sector, by making it possible to meet range and cost requirements, and doing it in a way that’s clean,” Cohn says.

Bromberg says that gasoline engines have become much more efficient and clean over the years, and the relative cost of diesel fuel has gone up, so that the cost advantages that led to the near-universal adoption of diesels for heavy trucking no longer prevail.

“Over time, gas engines have become more and more efficient, and they have an inherent advantage in producing less air pollution,” he says. And by using the engine in a hybrid system, it can always operate at its optimum speed, maximizing its efficiency.

Methane is an extremely potent greenhouse gas, so if it can be diverted to produce a useful fuel by converting it to methanol through a simple chemical process, “that’s one of the most attractive ways to make a clean fuel,” Bromberg says. “I think the alcohol fuels overall have a lot of promise.”

Already, he points out, California has plans for new regulations on truck emissions that are very difficult to meet with diesel engine vehicles. “We think there’s a significant rationale for trucking companies to go to gasoline or flexible fuel,” Cohn says. “The engines are cheaper, exhaust treatment systems are cheaper, and it’s a way to ensure that they can meet the expected regulations. And combining that with electric propulsion in a hybrid system, given an ever-cleaner electric grid, can further reduce emissions and pollution from the trucking sector.”

Pure electric propulsion for trucks is the ultimate goal, but today’s batteries don’t make that a realistic option yet, Cohn says: “Batteries are great, but let’s be realistic about what they can provide.”

And the combination they propose can address two major challenges at once, they say. “We don’t know which is going to be stronger, the desire to reduce greenhouse gases, or the desire to reduce air pollution.” In the U.S., climate change may be the bigger push, while in India and China, air pollution may be more urgent, but “this technology has value for both challenges,” Cohn says.

The research was supported by the MIT Arthur Samberg Energy Innovation Fund.

This story was reposted with permission of MIT News.

That was a suggestion I made years ago and now its coming together. Electric Vehicles suffer from their giant batteries are they are expensive, clunky and heavy plus they still give you poor range. An onboard generator (that’s what the combustion engine really is) solves all that. Put in an LNG tank, a gas engine and you have the cleanest of all world plus a very silent vehicle. A small battery enables it to go all silent in certain quarters where this is an add-on. I have run for those things to happen for 10 years now – most of… Read more »