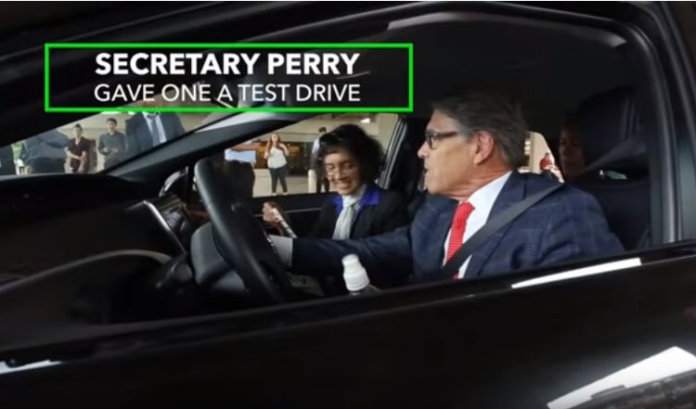 To commemorate the recently celebrated National Hydrogen and Fuel Cell Day, U.S. Department of Energy (DOE) Secretary Rick Perry got behind the wheel of a fuel cell electric vehicle at the DOE headquarters in Washington, D.C. Now commercially available, fuel cell vehicles are a part of America’s transportation portfolio, bringing the country a wider range of clean transportation options, according to the DOE.

Perry’s timing for driving the fuel cell vehicle coincides with the release of a new report showing DOE-funded research resulted in over 650 U.S. patents and citing roughly 75 innovations that could potentially be commercialized by American industry in the next several years. The department says these emerging hydrogen and fuel cell technologies have economic growth potential and can provide Americans with cleaner and more resilient energy options across a wide range of applications.

The DOE notes it has funded early-stage hydrogen and fuel cells research and development enabling a 60% reduction in fuel cell cost, a fourfold increase in durability, and an 80% cut in the cost of electrolyzers (for hydrogen production) over the past decade.

According to the DOE, there are now nearly 3,000 commercial fuel cell cars on the road, with industry projections for roughly 40,000 by 2023. The department says these cars can refuel in minutes, offer fuel economies of over 60 miles per gallon gasoline equivalent, and have a driving range of over 300 miles. The U.S. currently has about 30 public hydrogen fueling stations, located primarily in California, with plans for 100. At least an additional 12 are planned for deployment in the Northeast with private funding.

National Hydrogen and Fuel Cell Day, aptly chosen for the atomic weight of hydrogen (1.008), recently occurred on Oct. 8. The DOE’s Fuel Cell Technologies Office and the national labs are celebrating with activities and announcements across the country throughout the month of October.