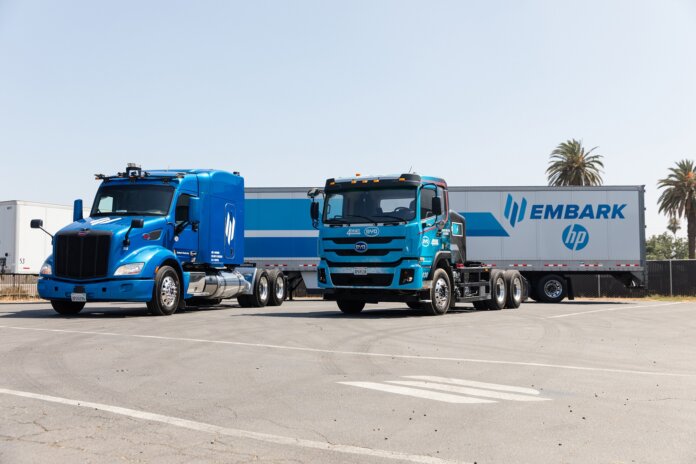 Embark Trucks Inc., a developer of self-driving software for the trucking industry, has launched a joint initiative with HP Inc. to combine electric and autonomous truck technology and create a more sustainable distribution network.

The two companies launched an electric truck drayage pilot in the Los Angeles area, where local loads are hauled to and from Embark’s highway-adjacent transfer points using BYD 8TT electric trucks operated by human drivers, while the longer middle segment of the haul is completed autonomously by trucks equipped with the Embark Driver software.

This EV drayage pilot gives HP the ability to leverage electric trucks – which currently have a driving range best suited for drayage operations – in a meaningful way within its supply chain, seamlessly complementing the efficiencies provided by Embark-equipped autonomous trucks, which are 10% more fuel efficient than human-operated trucks. Adopting both long-haul autonomous trucks and EV drayage enables HP to remove up to 50,000 tons of carbon dioxide and other pollutants from its distribution network over the next 10 years, according to preliminary research by Embark.

By working with regional drayage providers like 4 Gen Logistics – which operates the BYD EV trucks used in the pilot – HP and Embark are aligning with the goals of local communities and local policymakers, working collaboratively to make Southern California cleaner, safer and healthier.

“We’re combining the best of both worlds with this partnership, pairing the middle-mile strengths of autonomous trucks with the sustainability benefits of electric trucks in urban road settings,” states Alex Rodrigues, CEO of Embark. “Autonomous and electric trucks represent a powerful tool for companies like HP to help the trucking industry reduce harmful diesel emissions while continuing to deliver goods to the businesses and consumers who need them.”

HP joined Embark’s Partner Development Program in May 2021, with the intent of piloting a program for autonomous trucks as an element in achieving its broader carbon footprint and sustainability goals. Embark-equipped trucks offer better fuel economy, less idling, and the creation of EV drayage opportunities with Embark’s highway-adjacent transfer points. Since announcing the partnership, Embark and HP have delivered regular weekly hauls of hardware between HP’s Los Angeles and Phoenix distribution facilities.