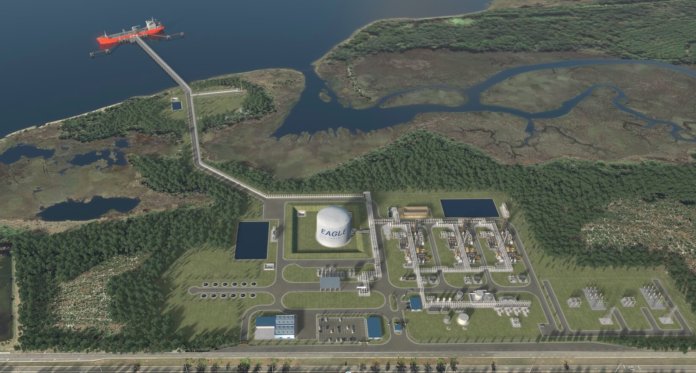 According to Eagle LNG, this marks the final step in the environmental review process before the project’s final federal authorization decision deadline and anticipated FERC approval.

“Achieving this critical milestone is a significant step forward for Eagle’s Jacksonville LNG Export Facility as we continue to advance our efforts to supply clean-burning, domestic and affordable LNG for marine bunkering and small-scale LNG export to both domestic and international markets,” states Sean Lalani, president of Eagle LNG. “We appreciate the continued support we have received from regulators, the Jacksonville and north Florida communities, and local agencies.”

The FEIS is a result of FERC’s comprehensive process that Eagle LNG started in December 2014. It includes the completion of numerous environmental, safety and security reviews involving input from both federal/state agencies and various stakeholders.

The proposed facility will initially consist of three liquefaction trains, which, at full build-out, will be capable of producing up to 1.65 million gallons of LNG per day.

“The Jacksonville LNG Export Facility, with its prime Florida East Coast location, will give us a unique and competitive advantage in helping provide some of the lowest-cost power generation for nearby Caribbean countries,” adds Lalani. “With approximately $500 million of infrastructure investment, this project will continue to generate numerous well-paying direct and indirect jobs in Florida.”

Based out of Houston, Eagle LNG is a wholly owned subsidiary of Ferus Natural Gas Fuels LP, a privately held portfolio company of The Energy & Minerals Group.