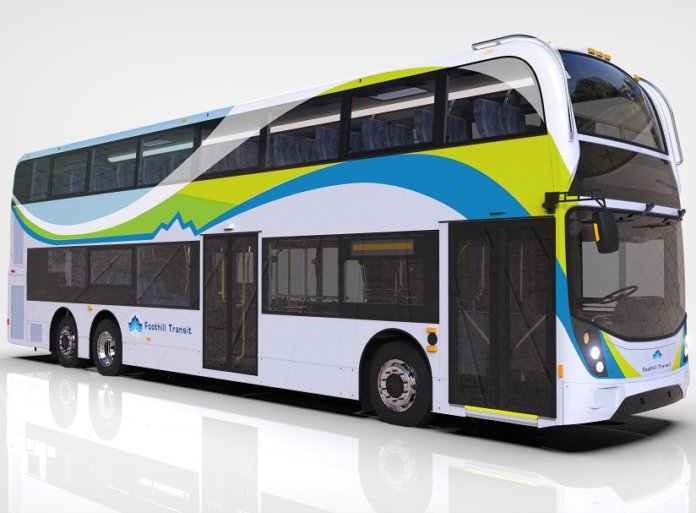 Southern California’s Foothill Transit has committed to purchasing an electric version of the Alexander Dennis Inc. (ADI) double-decker bus, the Enviro500EV, which will debut in Foothill Transit’s fleet in 2019.

Foothill Transit first demonstrated the ADI double-decker bus on its downtown Los Angeles routes in October 2016. According to the company, the customer response was overwhelmingly enthusiastic.

The Enviro500EV will be 13 feet, 6 inches tall and will be zero-emissions, thanks to an ADI partnership with Proterra, which will supply the battery and drivetrain technology. Foothill Transit already operates 30 Proterra electric buses in its fleet, and this latest acquisition is part of the company’s commitment to go fully electric by 2030. To date, Foothill Transit’s electric fleet has logged over 1.5 million miles of service in Southern California.

“It seems fitting that Foothill Transit, our first battery-electric bus customer, will pioneer this next phase of the sustainable transit revolution,” notes Ryan Popple, CEO of Proterra.

The purchase of the two new buses is made possible by a $1.4 million Metro Express Lanes Toll Revenue Capital Grant.

According to the company, one of its existing 40-foot CNG buses can carry approximately 38 customers. However, the Enviro500EV bus can carry 80 customers. Carrying more people in the same footprint allows Foothill Transit greater flexibility in choosing from limited-stop locations in downtown Los Angeles, where road space is at a premium, the company says.

“Deploying the Enviro500EV will be transformative for Los Angeles and for the United States,” says Doran Barnes, executive director of Foothill Transit. “No other transit agency in the country utilizes this technology on commuter express routes. And adding seats without increasing traffic congestion or local greenhouse-gas emissions is the ultimate benefit for one of the nation’s most heavily traveled corridors.”