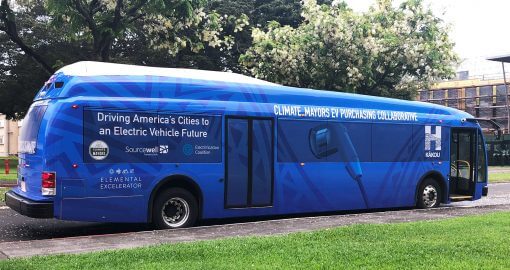 On Thursday, at the second-annual Climate Mayors Summit in Honolulu, 127 cities and 15 counties from across 38 states joined the Climate Mayors Electric Vehicle Purchasing Collaborative, committing to purchase more than 2,100 total electric vehicles (EVs) by the end of 2020.

Launched in September 2018, the collaborative is a partnership between Climate Mayors, the Electrification Coalition and Sourcewell, a national transit fleet transition program.

“The clean transportation revolution is not a distant vision for the far-off future; it’s a reality hitting the streets of Los Angeles and cities around the world,” says Eric Garcetti, mayor of Los Angeles and founder and co-chair of Climate Mayors. “By pooling our purchasing power, Climate Mayors are sending a powerful message to the global car market: If you build electric vehicles, we will buy them.”

In 2018, Garcetti announced the launch of the collaborative – an online portal that provides cities with a single, equal price for EVs and charging infrastructure by aggregating the demand from Climate Mayors cities and other public agencies, along with policy and planning guidance. The number of cities has more than quintupled since that announcement.

“The electrification of Honolulu’s city and bus fleets will go a long way in making our island more sustainable and resilient in the face of the current climate crisis,” says Honolulu’s mayor, Kirk Caldwell. “However, it will also improve the natural environment for our residents and visitors by eliminating smoky exhaust fumes and noise pollution from our communities.”