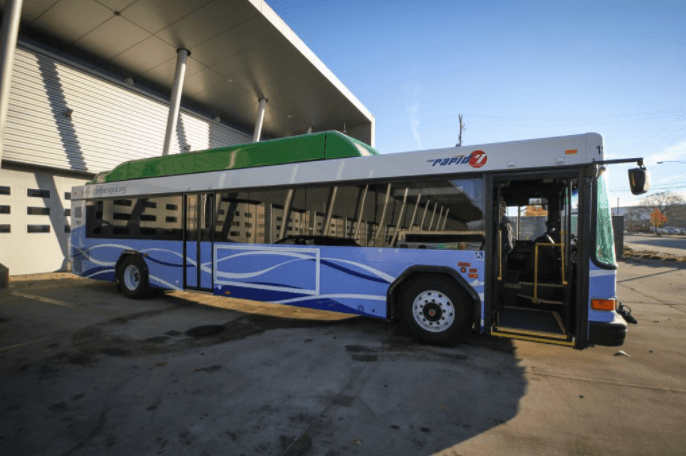 The City of Grand Rapids, Mich., and The Rapid Interurban Transit Partnership (The Rapid) have announced a new plan to deploy nearly 100 compressed natural gas-powered buses on the streets of downtown and the Greater Grand Rapids area.

As reported, the city will have 33 alt-fuel vehicles on the road this year, including 28 in service for The Rapid on bus lines in Greater Grand Rapids and five for the city’s free DASH shuttle service in downtown, which is operated by The Rapid.

The city says these new plans specifically call for The Rapid’s 150-vehicle fleet to include 92 CNG buses by 2021, which will make up Michigan’s largest system of natural gas-powered buses, according to the city’s announcement.

Notably, the city plans to purchase an additional four CNG vehicles in 2018 for the DASH and replace its entire fleet of diesel-fueled DASH buses over the next three years.

“This investment demonstrates an important collaboration of innovative partners within our community, using the most sustainable, clean, cost-effective and safe products on the market for transportation solutions,” said Grand Rapids Mayor Rosalynn Bliss, who kicked off the announcement during a news conference at the city’s Sixth Street Bridge Park, where the new buses were on display.

“Through a strong partnership between the City and The Rapid, we can use these new vehicles to continue our efforts that improve the quality of the air we breathe and the environment we enjoy,” she said. “This plan also allows us to be even more efficient stewards of taxpayer dollars by reducing the cost of operations moving forward.”

“The citizens of Walker recognize and appreciate the importance of identifying innovative solutions that reduce energy consumption – we applaud The Rapid and the City for their accomplishment,” said Huizenga. “By reinvesting the cost savings into additional alternative energy technologies, we can help make our communities even healthier now and in the future.”

Breaking it down, the plan will do the following over the course of the five-year transition period:

The city goes on to say that The Rapid board approved a $13 million contract in 2015 funded entirely through federal and state grants to buy 28 40-foot-long CNG buses. The acquisition funds came from a $10.4 million Federal Transit Administration grant that was “proudly supported by both Michigan Sens. Stabenow and Gary Peters,” as well as a $2.6 million grant from the Michigan Department of Transportation, Judnich said.

The Grand Rapids City Commission approved the $2.3 million purchase of five 35-foot-long DASH CNG buses entirely with local funds. The announcement adds that the orders have been placed through the Calif.-based manufacturer Gillig.

In addition, The Rapid board also approved a $5.3 million contract with Walker-based Triangle Inc. to build a new fueling facility at 1020 Market Ave. SW in Grand Rapids for the transportation system’s fleet of CNG transit buses. As reported, the facility is tentatively scheduled to open in mid-August.

“Using compressed natural gas to fuel our buses is a four-way winner – it’s clean, affordable, abundant and American-made,” said Kelly. “The wise decisions made by The Rapid and Mobile GR boards have put Greater Grand Rapids in a position that is ideally suited to meet our area’s public transportation and environmental stewardship needs today and tomorrow.” 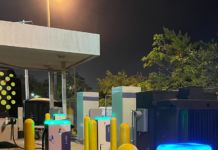