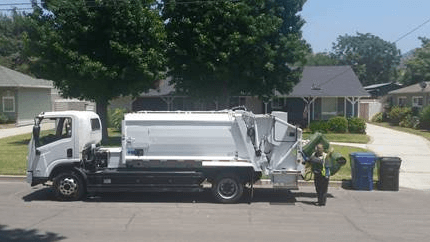 BYD says it has completed a battery-electric refuse truck demonstration project with the LA Sanitation (LASAN) and Wayne Engineering.

As reported, this demonstration logged more than 5,200 miles and drove up to 108 miles per day, with an average range of 99 miles, proving that zero-emission refuse vehicles are a viable technology for municipal waste haulers.

LASAN ran a four-month pilot project with a Class 6 battery-electric refuse truck developed by BYD and Wayne Engineering. The demonstration began in January 2017, with the truck operating on the same real-world routes and variable terrain as LASAN’s regular trucks. The vehicle delivered up to four tons per day to the landfill, all on a single charge, with no major mechanical or performance issues.

According to BYD, urban refuse trucks are vital yet challenging sector for electrification as most modern battery technologies have not been able to meet the heavy-duty service requirements for waste hauling operations. During LASAN’s demonstration with its BYD and Wayne Engineering battery-electric refuse truck, the zero-emission technology demonstrated it can meet the range and performance needs of the refuse industry.

“BYD set out to prove that our battery-electric refuse trucks reliably achieve 100 miles of range in everyday operating conditions, and we achieved that goal with a record-breaking 99 miles per charge over a four month timeframe,” says Macy Neshati, senior vice president of BYD Heavy Industries.

“This demonstration with LA Sanitation proves to other municipal refuse fleets that electrification is possible today,” she says. “Additionally, these battery-electric trucks can provide significant operational cost savings.”

Ron Cole, fleet manager for LA Sanitation, says, “LASAN worked closely with BYD during the testing to ensure the electric vehicle met our operational requirements and the outcomes of the testing are satisfactory. This will pave the path for LASAN to move to zero-emission collection fleet as part of Mayor Eric Garcetti’s Sustainability pLAn.”

“We’ve been designing and manufacturing innovative equipment for the waste management sector for half a century, and that has all been a buildup to this project with BYD and LA Sanitation, bringing cutting-edge electric technology to refuse hauling, which can easily be a zero-emission operation,” comments Kevin Watje, CEO of Wayne Engineering.

Evan Gillespie, director of the My Generation Campaign from the Sierra Club. “Getting fossil fuel trucks out of our neighborhoods and replacing them with zero-emission vehicles built here in LA County is a win for our health and our local economy. Visionary pilots like this are crucial to showing that electric trucks are ready to roll out on our streets now. The technology is ready, the workers are ready, and now LA is ready to move to zero-emission electric refuse trucks.”

Photo courtesy of LA Sanitation – LA Sanitation worker loads the back of the battery-electric refuse truck designed and built by BYD and Wayne Engineering on route through a Los Angeles neighborhood.