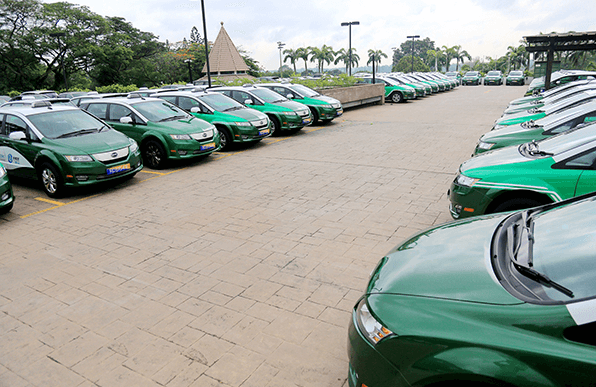 In addition, the commercial introduction of the pure electric e6 cars also represents the largest investment of its kind by a Chinese electric car manufacturer.

According to BYD, this latest rollout of electric taxis was launched amidst much fanfare from 300 attendees, including the Secretary General of the National Trade Union Congress Chan Chun Sing, diplomats and various BYD representatives. The introduction of the 100 e6 taxis is estimated to save the island state approximately 46,400 tons of carbon emissions a year.

This expansion comes two years after BYD’s fleet of 30 e-taxis first hit the country’s roads in 2014, operated by HDT Holdings, in partnership with the ride-hailing company Grab.

With the customized service of the 30 e-taxi fleet, HDT Holdings got special permission from the local government to run another 100 e-taxis and called up a tender for the fleet. BYD won this tender to provide the 100 e-taxis to HDT based on its global experience in the industry and the previous cooperation with them.

The BYD e6, an all-electric compact crossover/compact MPV, has zero emissions and offers a range of 400 kilometers. There are e6 taxi fleets in China, Colombia, Belgium, the Netherlands, the U.K., and the U.S. (New York and Chicago). BYD’s electric bus and other new energy vehicles have a footprint in 240 cities across 50 countries and regions.