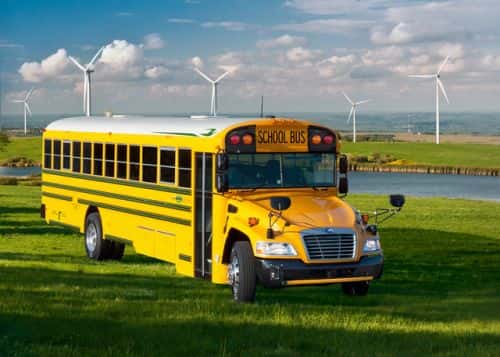 The state of South Carolina has purchased 26 propane-powered Blue Bird Vision Propane school buses to replace its aging diesel bus fleet. As reported, the alternative-fueled buses will be deployed to service Dorchester and Berkeley counties.

“While the South Carolina Department of Education is a low-bid state, we had heard about the propane technology that Blue Bird propane buses possess from various sources,” says Mike Bullman, director of maintenance for the South Carolina Department of Education. “With aging diesel buses in our fleet, it was time to replace them, and propane was the option we thought worked best financially and environmentally speaking over the long-term.”

These clean-operating propane buses represent the largest order of alternative-fueled school buses that the state has placed in the last 30 years. The buses were purchased from Blue Bird’s newest North American dealership, Blanchard Bus Centers.

“We’re pleased to offer alternative fuel options for school buses,” says Joe Blanchard, president of Blanchard Bus Centers. “We believe the state of South Carolina will begin to see immediate benefits from these new ‘clean’ buses. The financial savings should be noticeable from the beginning. An average propane bus saves a school district up to $3,500 per year in fuel costs alone.”

Blue Bird says its Vision Propane buses emit 80% fewer smog-producing hydrocarbons and virtually eliminate particulate matter when compared with conventional diesel. These buses will reduce nitrogen oxide emissions by over 40,600 pounds and particulate matter by more than 825 pounds each year compared with the diesel buses being replaced. Equipped with Ford Motor Co.’s 6.8 L V10 engine, each bus is powered by a ROUSH CleanTech propane fuel system.

“Sales of the Vision Propane bus increased 33 percent in 2016 when compared to 2015, and it’s no surprise to us,” says Blue Bird’s Chief Commercial Officer Mark Terry. “These buses clearly work to save districts money and are incredibly environmentally friendly. We are glad to see that South Carolina has added this amazing product to their fleet. We know they will not be disappointed.”