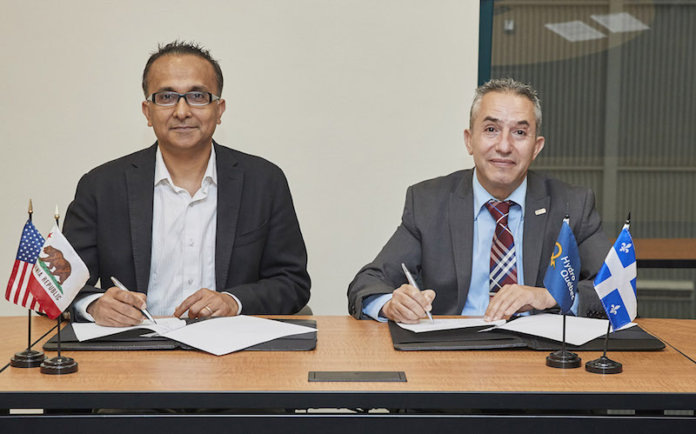 Hydro-Quebec and the U.S. Department of Energy’s Lawrence Berkeley National Laboratory (Berkeley Lab) have agreed to explore collaborations toward the research and development of manufacturing and scale-up technology to advance transportation electrification and energy storage.

The two institutions have signed a memorandum of understanding (MOU) to assess the feasibility of creating a Quebec Berkeley (QUBE) joint research center based in the San Francisco Bay Area that will speed up development of next-generation battery materials, processes, and methodologies and conduct manufacturing from pilot scale to pre-production levels. According to the partners, the technologies developed will be transferred to battery manufacturers, leading to job creation in Quebec and California.

“Hydro-Quebec is a world leader in scaling up energy storage to the marketplace, and this MOU provides a unique opportunity for collaboration,” says Berkeley Lab Director Mike Witherell. “Berkeley Lab’s groundbreaking research in this arena is also well-recognized, and this is an excellent way to partner on a project that will provide significant benefits to both Canada and the U.S. We are especially excited about creating jobs in both Canada and California.”

According to the partners, Quebec and California have each set ambitious greenhouse gas reduction targets that affect the grid as well as the transportation sector. The California Global Warming Solutions Act of 2006 set a target of reducing state greenhouse gas emissions to 1990 levels by 2020. Quebec’s Zero Emissions Vehicle (ZEV) mandate requires all automakers to generate ZEV credits equivalent to 3.5% of sales in 2018, climbing to 15.5% in 2020.

“Hydro-Québec has developed extensive expertise in the area of battery materials scale-up and commercialization for electric vehicles and grid storage,” says Karim Zaghib, general director of the Center of Excellence in Transportation, Electrification and Energy Storage and Conversion (CETEES) at Hydro-Quebec. “CETEES’ work on advanced materials, particularly for lithium-ion and solid-state lithium metal batteries, has resulted in 30 active licenses, 845 patents, and 370 scientific publications in the last few years.”

Photo courtesy of Hydro-Quebec: Ravi Prasher of Berkeley Lab and Karim Zaghib of Hydro-Quebec signed an MOU to assess the feasibility of creating a joint research center.