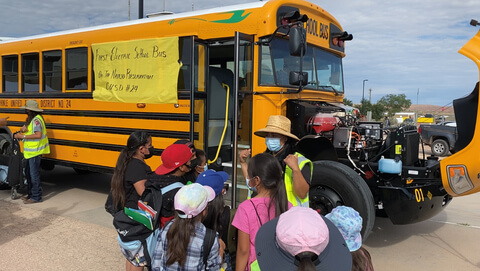 Chinle USD, which currently has an all-Blue-Bird diesel-powered bus fleet, is beginning to deploy zero-emission vehicles in order to “put student and community health first while reducing operating costs,” the district says.

Blue Bird says some customers have reported an average 14 cents per mile in energy costs for electric buses, compared to approximately 49 cents per mile for their diesel buses.

The company is providing its most advanced zero-emission school buses to Chinle USD, including two Blue Bird Vision and one Blue Bird All American electric school bus. These electric vehicles carry between 72 and 84 students for up to 120 miles on a single charge. Depending on the charging infrastructure, the buses take between three and eight hours to recharge fully.

The school district received a Transportation Modernization Grant through A for Arizona to upgrade its school bus fleet.