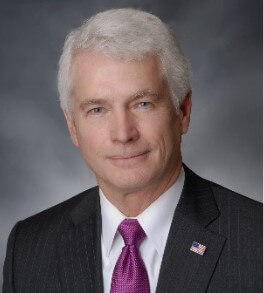 Dave McCurdy, president and CEO of the American Gas Association (AGA), has announced plans to retire in February 2019.

“Growing up in Oklahoma, natural gas was a part of the fabric of our community,” McCurdy says in a statement from AGA. “I saw, firsthand, how our energy choices affect families, businesses and our nation. I am gratified that during my career, we have moved from an era of scarcity to a time of natural gas abundance, which has helped us achieve our national goals of boosting our economy, enhancing our security and protecting our environment. I am optimistic about the future of the United States as we continue to benefit from our energy advantage.”

McCurdy joined AGA in 2011 after four years as president and CEO of the Alliance of Automobile Manufacturers, where he was instrumental in developing a national program to increase fuel economy. Before that, McCurdy spent eight years as president and CEO of the Electronic Industries Alliance. From 1981 until 1995, he served in the U.S. House of Representatives as the member from the fourth congressional district of Oklahoma. He also attained numerous leadership positions, including chairman of the House Intelligence Committee.

“I am confident that I will be leaving this organization better than I found it, with a positive, results-oriented culture and staff that a new leader will be able to rely on as they build for the future,” McCurdy continues. “One of the principle reasons I joined AGA in 2011 was to work closely with the outstanding leaders of the natural gas sector in a time of significant change, and it has been a joy. The AGA board of directors will begin its search for the new president and CEO shortly.”

He adds, “While there will be a good deal of focus on this search in the coming months, I will continue to be focused on the task at hand, representing natural gas utilities in Washington, D.C., and promoting the critical role of natural gas as a foundation fuel for our nation. This includes hosting the World Gas Conference in June, when more than 12,000 people will come to our nation’s capital from all over the world to participate in the premiere international natural gas event. I look forward to the opportunity to showcase America’s natural gas industry on the global stage.”