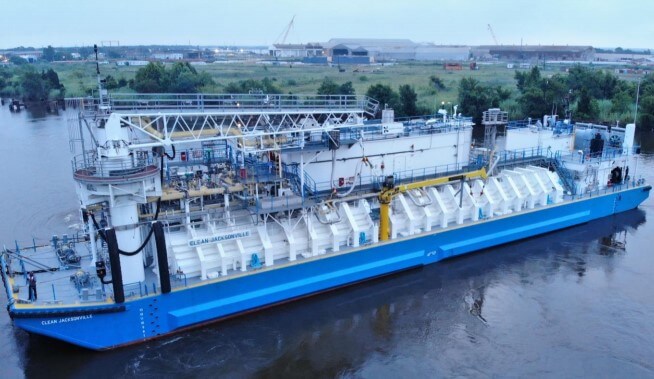 The Clean Jacksonville was constructed in Orange, Texas, at Conrad Orange Shipyard, a subsidiary of Conrad Industries, and the safe and successful gas trial execution took place in Port Fourchon, La. The vessel will enter service for TOTE Maritime Puerto Rico in the Port of Jacksonville, Fla., where the vessel will bunker two Marlin Class containerships operating on LNG fuel between Jacksonville and San Juan, Puerto Rico.

“TOTE Maritime Puerto Rico is excited to utilize the Clean Jacksonville for our LNG bunkering. Our partners, including Conrad Shipyard and GTT, have been critical in our development of North America’s first LNG bunker barge,” comments Tim Nolan, president and CEO of TOTE. “The use of LNG as a maritime fuel results in tremendous environmental benefits – including air and water quality improvements – and this barge is the final critical component of our LNG program in Jacksonville.”

Johnny Conrad, president and CEO of Conrad Industries Inc., adds, “While it has been a challenge and true learning experience, the Clean Jacksonville is a triumph for the U.S. maritime industry. I am proud of Conrad’s commitment, investment and foresight in shepherding the advancement of LNG as a marine fuel. We welcome the opportunity to work with customers as they explore and pursue the use of LNG in their vessels.”