Home Articles Natural Gas All Aboard! The Spirit of British Columbia Now Runs on Liquefied Natural... 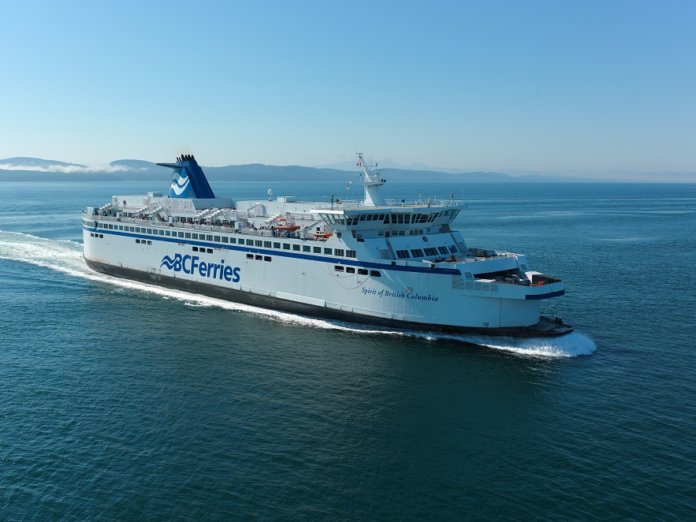 Now powered by liquefied natural gas (LNG), the Spirit of British Columbia, one of BC Ferries’ two largest vessels, has returned to service on the Metro Vancouver (Tsawwassen) – Victoria (Swartz Bay) route following the completion of a mid-life upgrade, which included a conversion to natural gas.

The vessel is the first of two vessels to be converted to operate on LNG, which is much cleaner for the environment than marine diesel, says BC Ferries, which expects to reduce carbon-dioxide emissions by 12,500 metric tons annually – the equivalent of taking approximately 2,500 vehicles off the road per year – by using natural gas to fuel the two Spirit Class vessels. The Spirit of Vancouver Island will undergo its upgrade and conversion from fall 2018 to spring 2019.

Simultaneously, fuel costs will be reduced by millions of dollars when both ships are in service operating on natural gas, says BC Ferries. The Spirit Class vessels measure 167 meters in length. Each vessel can carry approximately 358 vehicles across two car decks and up to 2,100 passengers and crew with a service speed of 19.5 knots.

Both of these innovations were conceived by BC Ferries and were designed, engineered and built by BC Ferries and its partners. The natural gas, provided by FortisBC, can be delivered in British Columbia, supporting the local economy, the ferry operator notes.

“The Spirit of British Columbia returns to service with clean technology that reduces both our environmental footprint and cost of operations,” states Mark Collins, BC Ferries’ president and CEO. “The two Spirit Class vessels consume approximately 16 percent of our fuel annually. The conversion of our two largest ships in the fleet, along with the introduction of our three new natural gas-fueled Salish Class vessels last year, goes a long way to improving the sustainability of our operations and affordability for ferry users.”

“Natural gas is the world’s cleanest-burning fossil fuel, and using LNG in deep-sea ships provides an opportunity to significantly lower greenhouse-gas emissions and air quality on a global scale,” says Roger Dall’Antonia, president and CEO of FortisBC. “In collaboration with BC Ferries, we developed a first-in-the-world proprietary tanker truck technology to deliver fuel while on board the vessel. Innovative solutions like this help make it easier for transportation customers to make the switch to LNG.”