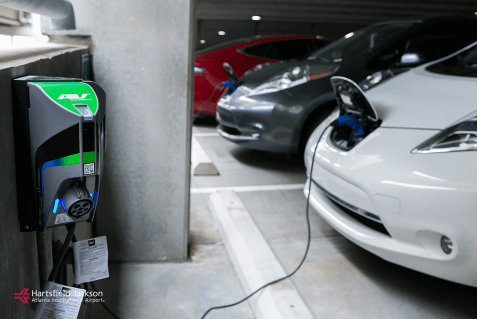 “Atlanta International Airport has set out to become one of the greenest airports in the world, and AeroVironment will help ATL and its guests support that goal with our TurboDock EV charging systems,” says Ken Karklin, vice president and general manager for efficient energy systems at AeroVironment.

“TurboDock is one of the easiest-to-use and most cost-effective charging stations available,” he continues. “Packed with features specifically designed to make it ideal for airports, including modular charging configurations, 120 V capability and mobile app-based access control, TurboDock helps EV drivers proceed with certainty.”

As reported, the TurboDock charging stations will be located at the following parking locations at the airport: North and South Domestic Terminal daily lots, South Employee lot, the Maynard H. Jackson International Terminal Hourly deck, the International Park-Ride deck, the ATL Technical Support Campus, and Maintenance Building No. 1 in the airport perimeter.

According to AeroVironment, the TurboDock is designed for commercial applications such as those found in Atlanta and other fast-growing EV markets. Out of the box, TurboDock charges at either Level 1 (12 amps/120 volts) or at Level 2 (16 amps/240 volts).

The company says TurboDock chargers offer power level and charging configurations appropriate for airport applications. As would be expected, drivers parking their cars at airports and other transit locations generally prefer a larger number of low-power charging ports rather than a smaller number of high-power ports, seeing as their cars typically remain parked for longer periods of time.

AeroVironment adds that TurboDock charging stations can be found in a growing number of workplaces, transit stations, hotels, shopping malls and universities.