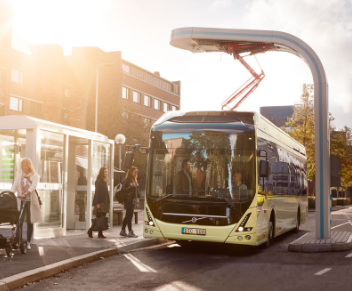 As reported, the order will include installation sites in Charleroi, Belgium, providing 15 ABB charging stations in total by 2018, to power 101 Volvo electric hybrid buses in the Wallonia public transport system, operated by TEC Group.

ABB notes its fast chargers are compliant with the open Interface OppCharge, which means that buses from other manufacturers can also be charged.

According to ABB, the scope of its second contract is a complete turnkey project to charge the additional 90 Volvo Electric Hybrid buses and includes 12 150 kW charging stations, substations, switchgear, civil works, installation and a service contract.

“We are very proud to have inaugurated the first two fast-charging bus stations in Namur. We are also very pleased to have been awarded the additional order of 12 chargers. This is an important milestone on the journey towards a sustainable public transport system,” says Urs Waelchli, product group manager for ABB’s electric vehicle infrastructure business. “By using open industry interfaces like OppCharge, we are providing a system that is open to all bus brands, as well as other charger manufacturers. We believe open interfaces and open standards are key for operators and cities to embrace the large-scale adoption of carbon emissions-free public transportation.”

“The order is a new milestone in our electromobility drive and confirms the competitiveness of our offer. We can see that more and more of the world’s cities are choosing electrified city bus traffic in order to deal with poor air quality and noise. The common interface for fast charging of buses and trucks – OppCharge – is gaining ground. The use by many suppliers of a common interface will facilitate the transition to electromobility in the world’s cities,” says Volvo Buses President Håkan Agnevall.

According to the company, the Volvo 7900 Electric Hybrid operates quietly and exhaust emission-free on electricity for about 70% of its route. Battery recharging takes three to four minutes with so-called opportunity charging. Energy consumption is about 60% lower than for a corresponding diesel bus. Volvo’s electric hybrids have already entered service in cities including Gothenburg, Stockholm, Hamburg, Luxemburg, Namur and Curitiba.