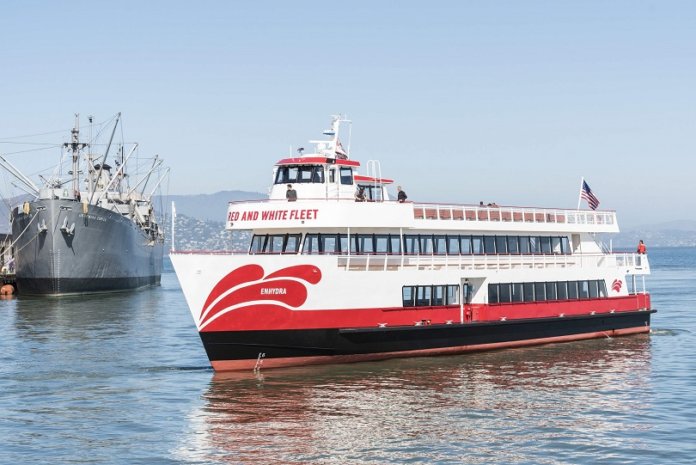 The Red and White Fleet, a San Francisco ferry business operating on the San Francisco Bay for over 126 years, has added a plug-in hybrid vessel to its fleet.

The Enhydra, a tribute to the California sea otter, will be the first aluminum-hulled, lithium-ion, battery plug-in hybrid vessel built in the U.S., the company claims.

Red and White partnered with BAE Systems, which is supplying its HybriGen propulsion system, including lithium-ion battery packs (160 kWh total), generators, the control system and AC electric traction motors. The system will be supplemented by a Cummins Tier 3 diesel engine running on 100% biofuel, further reducing emissions with a 30%-80% lower carbon intensity than fossil fuels, says Red and White.

The Enhydra was launched on Aug. 13 from Bellingham Washington and arrived in San Francisco on Sept. 5. The Enhydra is the latest development in Red and White Fleet’s commitment to operate a zero-emissions fleet of vessels by 2025.

“The Enhydra is going to change the way people experience San Francisco Bay with its sleek aesthetics and quiet hybrid drive, and we see it not only as the first step in moving our fleet to zero-emission but also leading our industry to a cleaner future,” comments Joe Burgard, vice president at Red and White Fleet.