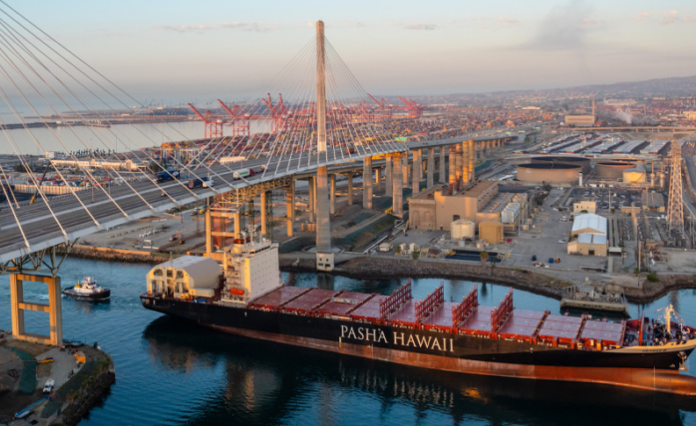 Clean Energy Fuels Corp. has supplied fuel for the first bunkering with liquified natural gas (LNG) of Pasha Hawaii’s new container ship MV George III. This was the first LNG bunkering of a container ship on the U.S. West Coast. Clean Energy worked with World Fuel Services and West Coast Clean Fuels to supply the ship with over 300,000 gallons of fuel.

MV George III, a 774-foot container ship, is the first of three LNG-powered ships that the domestic shipping company is putting into service; it operates between Long Beach, Calif.; Honolulu, Hawaii; and Oakland, Calif. The three ships are expected to consume 105 million gallons of LNG fuel over the next five years.

“The air quality around the Ports of Long Beach and Los Angeles is some of the worst in the country because of in large part the very dirty marine fuels that have been traditionally used by container ships,” says Andrew J. Littlefair, president and CEO of Clean Energy. “The move by Pasha to add ships that operate on clean-burning LNG is one the most forward-thinking and environmentally progressive actions taken in the maritime industry. We congratulate Pasha on their first successful bunkering operation and look forward to many more as Pasha continues to add the other LNG-powered ships to their fleet.”

The LNG that powers the Pasha Hawaii container ships is supplied by the Clean Energy plant in Boron, Calif. Because of the increase in demand for LNG by Pasha and others, Clean Energy is in the process of expanding its Boron LNG plant by adding a third production train, which will increase capacity by 50% when completed.

The MV George III is scheduled to bunker every second week at the Port of Long Beach. The second Pasha ship to operate on LNG, the Janet Marie, is expected in late 2022. The third Pasha ship is expected to be deployed in mid-2023.

Before the MV George III arrived at the Port of Long Beach, Clean Energy supported Pasha in the commissioning of the ship. Clean Energy worked at the shipyard in Brownsville Texas to cool down the ship’s LNG storage tank to cryogenic temperature and then performed two bunkering operations to load LNG into the ship tanks. The LNG was provided from Clean Energy’s Pickens LNG Plant in Texas. 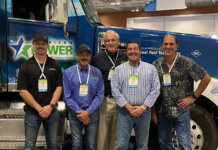 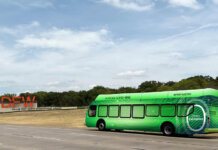