During Tuesday’s event, Marcus Kohl, DEP’s north-central regional director, along with DEP staff, joined representatives from RVT and from Gillig, the manufacturer of the CNG buses, to discuss the initiative and its environmental benefits. Color-coded balloons were used at the event to represent the net reduction of air pollutants that will be achieved by using the cleaner-burning fuel. In addition, attendees were given a tour of RVT’s CNG fueling station, also partially funded through AFIG.

“The deployment of these 10 CNG buses into the RVT fleet is estimated to result in a net reduction of eight pounds per minute of carbon dioxide, five pounds per hour of nitrogen oxides, four pounds per day of particulate matter, and two pounds per day of sulphur oxides,” said Kohl. “The CNG buses will also reduce liquid fuel costs, support jobs in the community and increase the use of fuels generated domestically.”

Ferguson explained that Lycoming County is an air quality attainment area. Under federal rules, vehicle owners are only required to have a gas cap check for emissions testing annually, saving residents the expense of paying for additional emissions testing on their vehicles.

The AFIG Program, established in 1992 under Act 166, helps to create new markets for alternative fuels in Pennsylvania. It provides an average of $5 million to $6 million annually to support alt-fuel fleet vehicle purchases and conversions and the development of refueling stations. 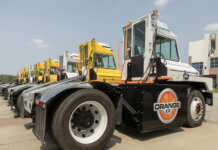